Go ahead and stream the below as your read this post. It’s my strained attempt to find some topical background music consistent with the post’s forced title. Maybe it’s just the introspection of turning 36, but it’s fun to hear an updated version of a song* that we used to listen to in high school.

* Wick-It Remix of the Luniz' “I Got Five On It,” with the opening minute or so cleaved and a line muted to keep things PG-13 around these parts….

So, I received my Shengshou 5×5 yesterday from amazon. I’m not really into higher order cubes, and certainly not into speed-solving them. But I guess that curiosity got the best of me. I wanted to test my theory that a 5×5 actually would be easier than a 4×4 for want of parity issues. I *hate* 4×4 last layer parity — with its long and confusing algorithms. Two 5×5 solves in, my theory seems mostly right. 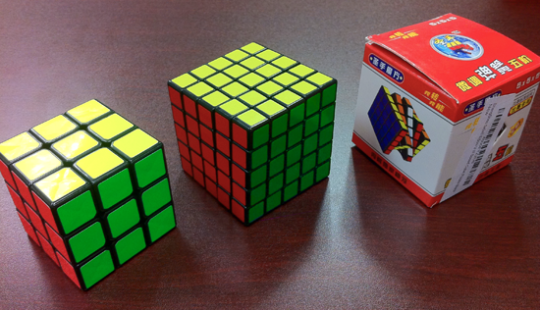 With five or six 4×4 solves under my belt, I’m averaging about 5 minutes per solve on my Shengshou 4×4 v4. (Just re-stickered with Florian mod super bright Izo stickers — totally awesome even on an unmodded cube.) That’s not awful, but it’s definitely not good. I can do multi-dedge pairing for the first 3 pairs, but then I get a little lost after that — reverting to beginner’s method of slicing and clearing via the top layer. Edge flipping is easy for me at this point, which means the last two dedges also come easily. But not those damn parity algorithms!?! So, each of the solves has required sitting in front of a computer and looking up the algorithms using Andy Klise’s pdf guide or Crazybadcuber’s video tutorial. Also, because there are no fixed centers, I’ve screwed up at least once in terms of center positioning — putting green next to blue, for example. (Easy to avoid, but I’m just not used to worrying about relative center positioning.) And, oh yeah, you can’t checkerboard an even-layered cube — for reasons I still can’t get my head around.

Enter the 5×5. My very first impression, funny as it probably sounds, is that it was much smaller than I expected. So much so that I actually had to dig around online to see if I had accidentally ordered a mini version. Nope. With the cube just a fraction larger than a 4×4, each cubie is actually about 20% smaller than on a 4×4. You can see it next to a 57mm Zhanchi in the picture above — not much bigger at all.

Its diminutive presence aside, the cube is very good out of the box. Without any lubing or tensioning, the inner and outer layers all turn very smoothly. It corners cuts well enough, I suppose — but, since I’m not speed-cubing with it, I don’t really care.

With a solid 3×3 foundation under my belt and a basic understanding of center formation and edge pairing on a 4×4, I found the 5×5 almost entirely intuitive. The fixed centers did indeed make things easier, although the 3×3 centers took much more work to form than the 2×2 centers on a 4×4 cube. I was able to form the first four centers easily, and then struggled for a couple minutes with the last two.

Forming the first 10 tredges was easy, if also fairly time-consuming; I used the slice-and-clear beginner’s method. I could not figure out how to solve the last two, however, with the 4×4 edge swap algorithm proving useless. So, I looked up Crazybadcuber’s tutorial, and discovered the following algorithm (viewed from top):

Worked like a charm — although I did have to apply it twice where the edges were not only swapped but one also was flipped. I assume that’s standard, but I also may have just misapplied it the first time….

Thusly converted to a 3×3 equivalent, I solved it quickly. No parity!?!

So far, I like this cube much more than the 4×4. It clearly takes longer to solve and requires a bit more brain power. But with only one algorithm to learn, I’m happy. I’ll likely re-sticker it to match my 4×4 — with the modded stickers even without modding the cube. Their curved corners help break up the faces and ease recognition for me. Until then, back to 3×3 F2L look-ahead practice….