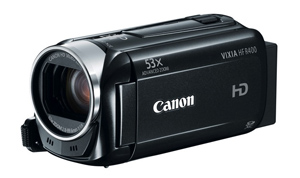 I’m a bit of a shutterbug, with a couple nice SLR bodies and a collection of Canon L glass at home. Once upon a time I had a really nice video camera that we used to film the kids doing kid stuff — you know, first steps and all that jazz. Well, the passage of time made that that camcorder seem prehistoric. Time to get a new one to record the goings-ons with the kids….

Enter a Canon VIXIA HF R400, a compact camcorder packing a big punch on a digestible budget. This blog is an unintended beneficiary.

As the owner of an SLR that falsely-claims noise-free 3200 ISO shots, I assure you that I approached the R400’s low-light claims skeptically. Less skeptical was I of the solid slow-motion claim, based on the option of recording at 60fps. I tested both in this quick video:

This was filmed at night with decent overhead lighting and no natural or ambient lighting at all. As marketed, the sensor performed well even in average light, but not without noise. The low-light mode definitely looked better, and 60fps allowed pretty decent slo-mo (which 30fps did not). My only complaint was that some of the colors are untrue — the orange seems peachy and the red pink.