Skip to content
Yes, I know this is a LONG post. It really needs the backstory to contextualize (and justify) the cube-dying project. If you’re here for the DIY only, skip to the jump. 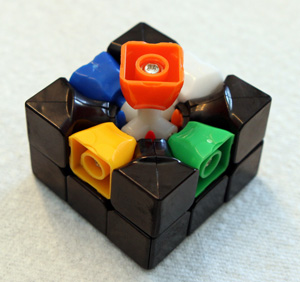 I’ve been cubing for about seven months now, and, in so doing, have gotten four friends to take up cubing. The five of us have spent our fair share of time on amazon.com and comparing notes, and have each come to favor Dayan Zhanchis as our go-to speed cubes. No real surprise there; many consider Zhanchis the gold standard. The surprise is more subtle. Of the three varieties of Zhanchis (black, white, multi-colored unstickered), we each rank them in exactly the same order: first, the unstickered; second, white; third, black. There’s just something “softer,” smoother yet clickier, more controllable about the unstickered cubes. We guessed that the matching preferences were the result of either small differences in the plastics or a shared placebic hallucination.

Slightly confounded, I found validation in this speedsolving.com thread about the “Force Cube.” Turns out another cuber, AL60RI7HMIS7, also had a hankering for stickerless Zhanchis. Realizing that they weren’t competition legal (the piece edges reveal the color of a face pointing away from you), she came up with a clever solution: Buy six stickerless Zhanchis, disassemble, and then reassemble, creating six different Zhanchis — each of a single color of plastic (read: competition-legal), and each made of the stickerless plastic that some cubers prefer. Those solid colored cubes could then be stickered like any other cube. BRILLIANT! The only rub was that six Zhanchis would generate only one white cube, with five “byproduct” cubes in undesirable colors. Of course, none of the six were black.

Whatever the case, whatever the explanation, whatever others’ opinion on the matter, I will say with confidence: I prefer using stickerless Zhanchis, but find their multi-colored pieces cheap-looking and toy-like; I much prefer the look of black stickered cubes. So, when someone posted a link to this very excellent video demonstration of dying a white ABS puzzle black, and then suggested that the same technique might turn a multi-colored cube black, the prospect of a black Zhanchi made of the unstickered plastic grabbed me. The holy grail of cubes was just a DIY project away….

All of which is an absurdly long introduction to the DIY project below. The results are surprisingly good, and, minimally, a compelling proof of concept.

Yes, you can dye a multi-colored Dayan cube black. You need acetone, Rit clothing dye, and patience. I can’t possibly do a better job than bmenrigh does in this video demo. Watch it, and you’ll succeed. Here are some pics of my process:

The last two pics show a side-by-side of a black Zhanchi and a dyed multi-colored Zhanchi. Hard to tell which is which….

If you don’t want to watch a 20 minute video, here are the instructions:

Disassemble the cube, including each piece (edges are two pieces plus the torpedoes; corners are three pieces). I didn’t dye the torpedoes (too small and invisible) nor core (I didn’t want to re-tension, and it’s BARELY visible when re-assembled). Fill the glass bowl with a 25/75 mixture of acetone/water. Add a drop of soap to break the surface tension of the water and to prevent the pieces from floating. Add the dye and stir. CAUTION: The dye is made to stain stuff. It will stain your hands, clothes, floor, counter, etc. (It did not stain my stainless steel sink nor spoon nor glass bowl.) Wear gloves, use newspaper, etc. Also, acetone is dangerous, flammable, nasty stuff. Use in an open space away from flames.

Add the parts. Stir every couple minutes to keep the pieces from sticking. If your experience is like mine, some of the pieces (the green and blue ones, specifically) will dye fully black in 20 minutes. For whatever reason, the other four colors would not fully dye (and, instead grew dark reddish — as in the fifth pic in the gallery). They just would not turn black. Not after another 20 minutes. Not after another hour. Not after another two hours. And over-soaking those pieces damaged a couple of them — acetone is indeed corrosive (which is the very reason you’re using it). For reasons I can’t explain, it took a second batch of solution (new dye pack and all) to complete the dye job on the other four colors in about 25 minutes. Maybe the acetone had evaporated too much from the first batch? Maybe the blue and green dyes were more permeable to the black dye and soaked up too much of it? I really don’t know why. But, if you have the same experience, DO NOT leave the pieces soaking too long in the first batch. Just start over with a new batch.

Once dyed, drain with the colander, rinse with soapy water, reassemble, and sticker. Voila — a stickered black Zhanchi made of stickerless plastic. Except for the marring evident on a couple pieces pre-stickering (eighth picture in the gallery), the process worked perfectly and produced exactly the cube I was after. As with any process, I would definitely do it better the second time, especially knowing about the (odd) second batch trick.

Was this worth the effort? For me, yes. Although I have a very hard time visually distinguishing the OEM black Zhanchi from my dyed one, I can feel the difference instantly. Snake-oil? Placebo? I genuinely don’t think so. Nor do I care. Whether the joke’s on me or not, I’m really pleased with the cube.

2 thoughts on “Eppur Si Muove (Or: How I Learned to Stop Worrying and Love Dyed Cubes)”