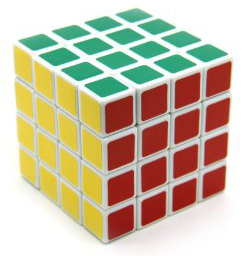 Excepting a one-week detour to play with a Pyraminx and a weekend of fiddling with 2x2s, my cubing adventure has been exclusively a 3×3 one. Back in April, I purchased a QJ Mini 4×4 on amazon, and I thought I might get into it. Instead, I dove more deeply into the 3×3’s, learning F2L far better, mastering the PLLs (just 3 Gs left), and picking up OLLs here and there.

On Saturday, my five-year stumbled onto a youtube video of a 7×7 solve (probably starting with my youtube history) and asked, “Dad — why don’t you get a big cube?” Not one to argue with the flights of a kid’s imagination, I relented by pulling out my dusty 4×4. (A far cry from a 7×7, but, like a camera, the best one is the one that’s with you.) I spent 30 minutes in front of youtube (learning, as I did with a 3×3, from RobH0629‘s great tutorial), scribbled down a few parity algorithms, and then, voila!, solved a 4×4. The first time took about 17 minutes. Yes, 17 minutes!?! I kept screwing up the edge pairing and was destroying old pairs when building new ones…over and over and over. Once I figured that out, I got a 9-minute solve. I’d imagine that I could get it down to 5 minutes with a couple more days of practice.

In the meanwhile, in no particular order, here are my quick thoughts/reactions on the 4×4:

Now back to those last G perms….